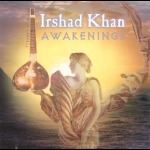 In this ground breaking album, Irshad Khan, creates a new style in the world of sitar music by blending his musical genius with sounds from the global village

This album is the latest release from one of the greatest sitar/surbahar virtuosos Irshad Khan. This marks his unparalleled versatility in today’s world of sitar music with his entry into the realms of worldbeat fusion music. Those who are drawn to the sound of the Sitar and Surbahar (bass sitar), but who perhaps feel daunted by the complexities of classical Indian music, will find much to enjoy in this album. Awakenings highlights Irshad's gifts as a melodicist by keeping the rhythms simple and precise, the song lengths shorter (they average about ten minutes each), and the improvisations accessible. Expanded instrumentation also lends the album a more global flavour, with Middle Eastern, Spanish, Indian, African and Western percussion drums, didgeridu, violins, cellos, double base, guitar, saxophone, piano and other sounds. Besides the recording is also excellent, thus enabling the listener to appreciate the subtle atmospheres which result from the blending of these various elements.

The younger generation of renowned Classical Indian musicians is building bridges to reach Western ears. They embrace tempered scales and harmonies, novel instrumentations and melodies, dub rhythms and Dance Hall grooves yet are deeply trained in the traditional arts. As master disciples of preeminent Indian music gurus, this cadre of often expatriate artists is faced with the formidable task of exploring uncharted terrain in the West.

Son of sitar/surbahar virtuoso Imrat Khan and nephew of the legendary Ustad Vilayat Khan, Irshad represents the 8th generation of a 400-year old lineage/legacy called the Imdadkhani gharana. This illustrious family is considered the most important source of top sitar and bass sitar players in the world. Irshad's great-great grandfather Ustad Sahebdad Khan is credited with the invention of the surbahar, the king of plectrum-plucked stringed instruments on the Indian subcontinent developed from the ancient kachva veena and spanning a range of over four octaves, one octave of which can be pulled/bent from a single of its massive strings. This Imdadkhani gharana is also held largely responsible for the evolution and perfection of the sitar as originally invented by the 13th century poet-musician-saint Ameer Khusroo.

Irshad began public performances at seven and debuted internationally at 13 when he performed at the Queen Elizabeth Hall in London. At 18, he made history by becoming the youngest soloist ever to perform at the prestigious international music festival "Indian All Night Concert" at the Proms in London. He is fond of a particular vocal playing style called "gayaki-ang" that blends classical forms of Dhrupad, Khyal, Tappa and Thumri. He currently divides his time between Toronto / Canada and Bombay/India where he teaches, composes, lectures, demonstrates and conducts intensive workshops and master classes. His readily available discography in the West includes the classical albums Raga Jensanmohini (India Archive, 1996] and The Magic of Twilight [Naxos, 2000].

On Awakenings, Irshad steps out of the tradition to join the every-growing World Beat phenomenon. He surrounds himself with guitarist Miguel De La Bastide as well as Ron Allen, Deb Sinha, Mario Mello, Dee Long and D. Choudhary and opens the albums's five tracks (10 minutes average each) with the fiery "Gypsy in Red", a heavy-metal sitar attack launched with driving hand percussion groove, palmas and synth sax straight into crossover heartland. The sympathetic sitar strings are furiously at work to make one instrument alone sound like a complete orchestra.

"Power of Grace" opens dramatically with wordless Indian-style male vocalizing, rising like curling smoke in serpentine embellishments from the ashes of intermediary respite before the up tempo groove kicks in and Irshad's surbahar begins to veritably growl in its lower registers.

The main theme here has a boisterous intensity wonderfully augmented by Irshad's extensive string sliding that maximally exploits the innate flexibility of large-scale tonal slurs possible with the bass sitar. Rather than emphasizing its timbral majesty in hypnotically suspended alap mode, Irshad opts for the high-energy assault instead. It isn't quite sitar rock -- no amp-induced distortion for one. The aptly titled "Joy of Life" the melody emulating a jubilant playfulness riding with youthful vigor above the syncopated shrum-shrum of Miguel's guitar.

The central highlight is "For you my Love", a mellow House groove with backing guitar and synth effects, drum'n'bass beats and a circular sitar motif filled with great romantic longing. Here the sitar's sinuous charms are truly employed for concentrated meditative/transcendental aim - surprisingly effective in such an ultra-modern setting. This track has great trance-inducing power and can be enjoyed on endless repeat for hours, drifting into the Great Unknown like a mythical schooner shanghaiing you onto an interstellar space trip.

The concluding "Mystic Journey" is based on the waltz-like Rag Bhairavi twirling leisurely above tablas and drones to finish off this recording in a slightly more traditional vein. All in all, a fascinating glimpse into Irshad's development as a WorldMusic ambassador.
World Music December 2002